Fred has been involved full time in the residential, commercial and industrial renovation industries since 1963 as both a contractor and home inspector. During this time he has successfully completed thousands of projects, in addition he has held licenses as a master builder and master electrician in both Philadelphia and Lower Merion.

In 1988 he formed Inspections Unlimited Inc. and began a relationship with the American Society of Home Inspectors, (ASHI®) of which he has been a certified member #8465 since 1991. He is also a licensed home inspector in Philadelphia # 24524. In addition he is a member of the American Association of Radon Scientist and Technologist (AARST) where he has held radon certification # 1548 from the Commonwealth of Pennsylvania since 1993. 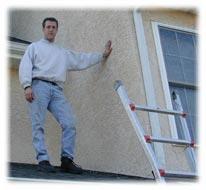 Neil joined the company in 1997 as an inspector, and in 1999 he obtained full membership in ASHI®, certification #202360. He is also a licensed home inspector in Philadelphia # 24525. His addition to the company enables greater flexibility in the performance of inspections and for large projects an experienced two-man team.

Many years of prior involvement in the construction industry along with intense training as an inspector have enabled him to provide valuable information and service to clients.

In addition to performing property inspections Neil is also licensed as a radon tester, # 2708 by the Pennsylvania DEP.